These are just a few of the Boxers who come to us in really bad shape and require extra medical attention or require more funds than average. We will post periodic updates on our patients. As always, donations toward their medical care are greatly appreciated. 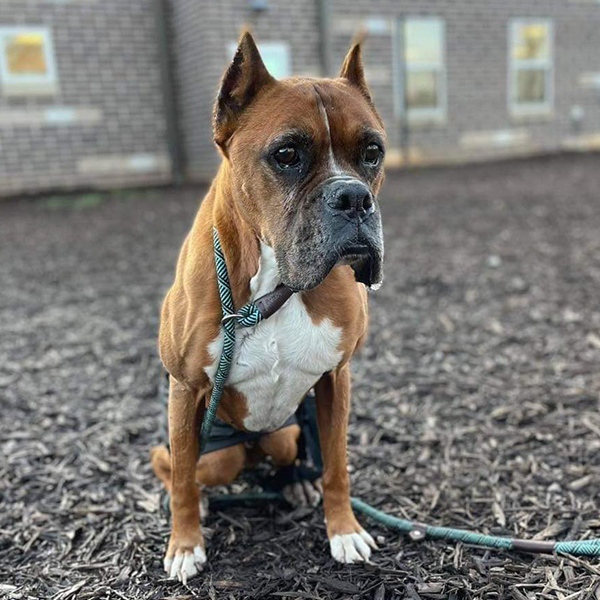 Please welcome Duke to ABR! When we found out this handsome guy was sitting in a shelter as a stray, it just broke our hearts. Duke currently has no use of his back legs. We had no idea what may be going on with him or how sick he may be, but we knew we had to do something!

Some of Duke's story has since been shared with us, and our broken hearts have shattered even more. We learned that Duke used to have a family and a home. Earlier this year, both of his family members passed away in a short period of time, and he unexpectedly found himself alone.

Duke was transported to one of our vets late last week, where he has been undergoing treatment for the ailments we can see, and initial tests to find out what else may be going on where we can't see. Duke will be having more tests done later today, and we hope to have an update soon.

We do know for sure that Duke has tested a high positive for heartworm infection, and he is currently being treated for an ear infection. He is also getting regular meals and much needed rest while hospitalized.

Please keep Duke in your thoughts and prayers over the coming days! 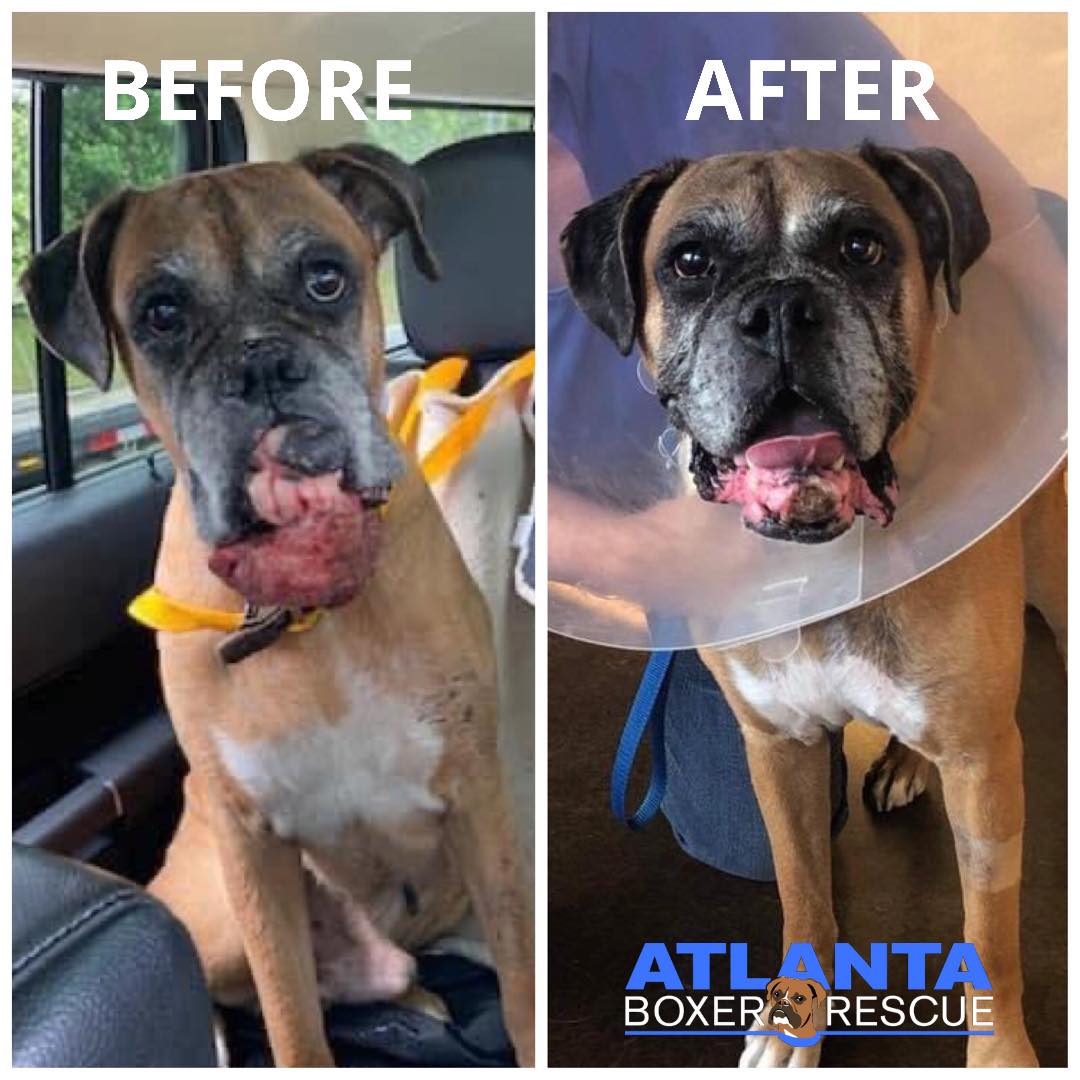 When we received the initial photos of Kirby, we couldn't believe the size of the masses on his mouth! We didn't know if anything could be done, but we knew we had to help. We learned that Kirby has two separate issues going on - gum overgrowth (gingival hyperplasia) and masses on his chin. Sadly, Kirby's biopsy came back and the mass on his chin was a mast cell tumor (cancer). The chin mass was also infected when Kirby arrived, so he was on antibiotics to clear up the infection. We had several consults with our vets over the first few weeks to see if there was a removal option for the chin mass to make him more comfortable and avoid any more secondary infections. Well after many consults and general observation of Kirby's quality of life, we decided to move forward with surgery. Kirby had surgery to remove the nasty growth under his lower jaw, and debulk the other one. This will not cure him or even lengthen his life. This surgery was solely for his comfort while he is still active and wanting to be a boxer. Things will be so much better for him! He'll be able to go in all of the house without the constant oozing, we'll be able to give him proper hugs, hopefully he'll be able to eat like a dog, he'll be able to shake his head…and more!

Adult heartworms live in the heart and pulmonary arteries of infected dogs. They survive up to 5 years and during this time, the female produces millions of baby worms (microfilaria). These microfilaria live in the bloodstream, mainly in the small blood vessels.

When fully developed, the infective larvae enter the bloodstream and move to the heart and adjacent vessels, where they grow to maturity in 2 to 3 months and start reproducing.

Adult worms cause disease by clogging the heart and major blood vessels leading from the heart. They interfere with the valve action in the heart. By clogging the main blood vessels, the blood supply to other organs of the body is reduced, particularly the lungs, liver and kidneys, leading to malfunction of these organs.

A lot of dogs infected with heartworms do not show any signs of disease for as long as two years. Unfortunately, by the time signs are seen, the disease is well advanced. The obvious signs of the disease are a soft, dry, chronic cough, shortness of breath, weakness, nervousness, listlessness and loss of stamina. A lot of these signs are most noticeable following exercise where dogs can faint from the lack of air passing through their lungs.

There is some risk involved in treating dogs with heartworms. The treatment to kill adult worms is an injectable drug that will kill the worms in the heart and adjacent vessels over a period of about 30 – 45 days.

Complete rest is essential after treatment: some adult worms die in a few days and start to decompose; the remainder will die during the 30-45 days. As they break up, they are carried to the lungs, where they lodge in the small blood vessels and are eventually reabsorbed by the body. This is a dangerous period, and is it essential that the dog be kept quiet and not be allowed to exercise. The first couple of weeks after the injections are very critical because the worms are dying. A cough is noticeable for 7 to 8 weeks after treatment in heavily infected dogs.

Demodectic mange (also known as red mange, follicular mange, or puppy mange) is a skin disease, generally of young dogs, caused by the mite, Demodex canis. All dogs raised normally by their mothers possess this mite as mites are transferred from mother to pup via cuddling during the first few days of life. Most dogs live in harmony with their mites, never suffering any consequences from being parasitized. If, however, conditions change to upset the natural equilibrium (such as some kind of suppression of the dog's immune system), the Demodex mites may "gain the upper hand." The mites proliferate and can cause serious skin disease

The lesions and signs of demodectic mange usually involve hair loss; crusty, red skin; and at times, a greasy or moist appearance. The mites prefer to live in the hair follicles, so in most cases, hair loss is the first noted sign. Usually, hair loss begins around the muzzle, eyes, and other areas on the head. The lesions may or may not itch. In localized mange, a few circular crusty areas will be noted, most frequently on the head and forelegs of young dogs 3-6 months of age. Most of these lesions will self heal as the puppies become older and develop their own immunity. Persistent lesions will need treatment. In cases in which the whole body is involved (generalized mange), there will be areas of hair loss over the entire coat, including the head, neck, abdomen, legs, and feet. The skin along the head, side, and back will be crusty and oftentimes inflamed. It will often crack and ooze a clear fluid. Hair will be scant, but the skin itself will often be oily to the touch. There is usually a secondary bacterial infection. Some animals can become quite ill and develop a fever, lose their appetite, and become lethargic. Patients with generalized demodectic mange need immediate vigorous treatment.

The treatment of Demodectic mange is usually accomplished with lotions, dips, and shampoos. Fortunately, 90% of demodectic mange cases are localized, in which only a few small areas are involved and can often be treated topically.

Thanks to all of you who step forward to help save these sweet babies!
We couldn't do it without you!

*Any funds collected above and beyond an individual dog's vetting expenses will be directed to other ABR dogs in need.